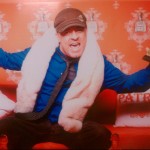 Russ Weakland joined TheBlast.com in 2022 after working for 13 years at HollywoodLife.com as their Senior LA Reporter. He has been known to help break some of the most exciting, exclusive content on all your favorite celebs. He can also always be found covering major Hollywood and entertainment events like the Oscars, Super Bowl, The Voice, American Idol and WrestleMania to name a few and is continuously on the red carpet for the biggest movie and TV premieres of the moment. Throughout his career, he has also helped break some of the biggest stories in Hollywood, including the explosive Chris Brown and Rihanna domestic violence incident in 2009. Close to 18 years ago he worked at Radar Online and TMZ and in the film industry on various TV, Film and commercial sets including but not limited to ESPN, Chronicles of Narnia: Prince Caspian and Without A Trace. Along with everything in entertainment, he is looking to bring a voice to the site for all things professional wrestling that will include WWE, AEW, NWA, Impact, ROH and so much more. He is a proud graduate of Full Sail University in Orlando, FL.